Hewlett Packard Enterprise hosted a gala event, virtually of course, to announce their strategies for the rest of the fiscal year and to recognize and award some of their key partners during the year 2020.

The event, which was hosted by Mauro, was well planned and very well executed.  The event started with had the opportunity to hear from the leadership team.  The event ended with the recognition and award ceremony.

We had the opportunity to hear from Martin Castillo, HPE's Managing director for RLA (see my interview of Martin in Puerto Rico).  He shared with us the importance of the channel partners role in HPE's ecosystem and go-to-market strategy.

When asked when financial programs such as Greenlake are going to be available to countries other than Puerto Rico and Costa Rica, he explained that HPE is currently working with some local partners and local financing agencies to make it happen in the future. 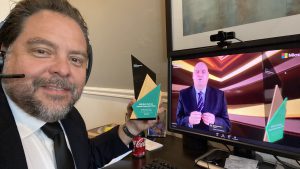 ger, had an opportunity to discuss strategy for channel partners as well. Mafe as we endearingly refer to, has vast experience working in sales and is very familiar with all partners both in Caribbean and central America.  Mafe has been with HPE for 10 years and she recently had the role of SMB and Distributors Business Manager for Rest of Latin America. Before that she had several sales roles like Enterprise and SMB Segment Product Specialist. This combination of roles gave her the opportunity to get to know every detail of our Channel Ecosystem, this will allow her to support the evolution of this model in our region. And during her presentation we learned that she loves Tennis and Spinning!

We heard from Juan Carlos Monzon, Enterprise and Commercial Segment Manager Caribbean/Central America, discussing further on the opportunity that everything-as-a-service brings to the IT industry. Juan Carlos has been in the company for 30 years performing several leadership roles in the services area in Latin America, more recently as Pointnext Sales Manager for RLA.

Erika Araujo was introduced as well.  Erika joined HPE 15 years ago in the Human Resources area, subsequently she took the position of Sales Strategy and Planning manager for Brazil and later on for all Latin America.

Erika knows the market and the relevance that the channel partner ecosystem has for HPE. Her trajectory and experience in strategic planning of business and in the definition of commercial processes, confirm the commitment with the Channel Partner community in the industry to work together and evolve the business model of HPE in the region.

The gala event reached a peak when the host announced the recognition portion of the event was starting.  I already knew our team had been awarded because HPE had the foresight to have a trophy delivered the same day of the event along with a beautiful care package.  You can see the short video of the Westham recognition below, where Juan Carlos so eloquently delivered the preamble.

As Juan Carlos mentions, the recognition is for the type of PointNext solution we were able to put together with the help of HPE.  It involved "Right Mix Advisors" and many other services which are allowing a very important telco and service provider in the Caribbean achieve the digital transformation goals.

I am so proud of our team, this is truly a teamwork effort.  Without the efforts from Harry Sanchez, Anibal E. Arvelaez,  and Oscar Jaen, this would not have been possible.

We thank HPE for the recognition and we look forward to working with all our customers in the upcoming months to have a stellar second half of FY2020.